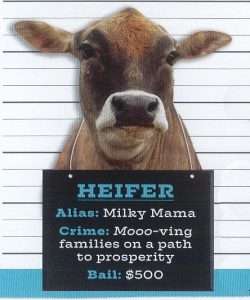 I was recently in Arkansas at our Ranch in Perryville and Headquarters in Little Rock. Stay tuned for the next video for a special thank you from me and my new friend.

I’m here with my new kid and I want to thank you for your recent donation to Heifer. Because of you, kids like this are given to families around the world to help lift them out of poverty. Thank you again so much for your generosity and support.

Maria Juana Chaluisa’s home is in the middle of two snowcapped volcanoes at a height of 14,000 feet above sea level. She says, “It’s cold here.” Alpaca’s do well here with their padded feet that don’t disturb the ground and they have eating habits that nibble the tops of grasses instead of pulling the plants up by the roots. And here they produce the Alpaca Wool that is warmer than most any fibers. Their owners knit, crochet, and weave these fibers into iconic clothes that are needed to survive in the Andes.

Men and women both take up the skill of knitting. José Pedro Pablo Cuzco, 65, left school after the 3rd grade, but learned to knit. He hopes to generate income. Heifer has helped by introducing bigger and more productive alpacas. With extra income they can buy Guinea Pigs, Rabbits, Chickens, and Sheep to raise for food and to sell. Pablo said, “I’m ending my life, but I will open doors for the young people to move forward.”

We probably should bail out “Spit Monger” so she can help a farm family find their way out of hunger and poverty. 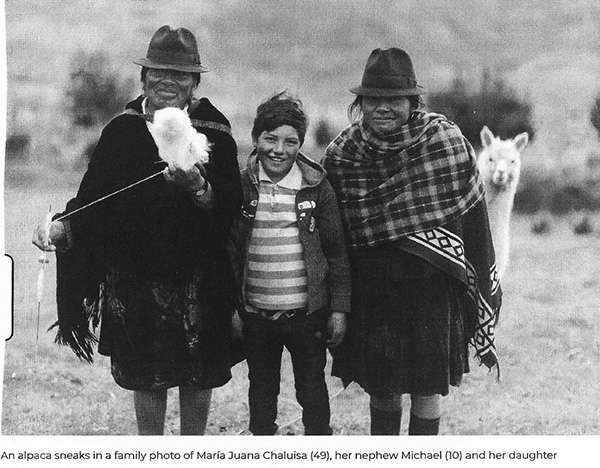 I reported June’s activity at the Men’s meeting on Saturday morning. The donations for June were: 2 Heifers; 3 Flocks of Chicks; 2 Gifts of Honeybees; a Goat and an Alpaca. Matching funds from Heifer International produced 2 Heifers and a Pig. That’s 12 farm families that will see immediate relief from hunger and poverty and will eventually reach approximately 108 families. Since 1944, Heifer has helped more than 39.8 million families.

Like the family of Ganga in Nepal, who never had enough to eat, she received 2 Goats from Heifer, grew her herd to 55 Goats and then COVID-19 hit. Severe restrictions by the government shut down the markets and put everyone in peril. Heifer responded by meeting with Ganga, other Heifer families and the local government. They formed an “Agri-Ambulance” which collected vegetables, milk, and other products and delivered them to hungry families. One farmer, Bishnu, was worried that all his produce would spoil, but the “Agri-Ambulance” prevented that.

Don’t forget the contest. Which will be the first to send me to the Bailiff?

Thank you all for your generous support. 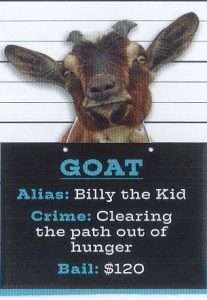 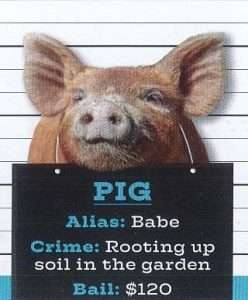 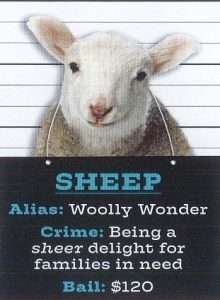 About our contest – it was announced on June 26th and was won by “Billy the Kid” (Goat) on July 6th. Tomorrow (July 18) I will be bailing out “Wooly Wonder” (Sheep) for 2nd place. It amazes me as to how fast us Lakeviewers get things done. Thank you!

Speaking of getting things done, Fungaimudoti Mafuta and his wife, Kudakwashe, are farmers in Matamba, a village in the center of Zimbabwe. For years it was not enough money, food, time, or energy. They couldn’t keep their heads above water, even by gathering firewood or herding cattle for hire.

Then, they joined two Heifer Projects in their village. Serious training followed before they were awarded 5 Goats from Heifer. A few years later, they received a Heifer. Things changed with the Goats. Their diets improved both in quality and quantity. They “Passed the Gift” of 5 Goats to friends and neighbors and, later, the Gift of a Heifer. What do they have now? They, who once had no livestock, now have 14 Goats, 5 Cows and 15 Chickens. They sell eggs, milk, goats, chickens, maize, ground nuts, and vegetables. What a wonderful story.

You did it! All three animals in our contest have been bailed out. “Babe” the Pig was the last one. She left to do her job on Wednesday.

Just two more examples of the change a pig can make for a poor, hungry family. Pigs provide a valuable source of protein. They provide income from the sale of offspring, and they provide natural fertilizer to nourish crops and soil. Pigs need little land and thrive on crop and garden scraps. “Babe” can produce up to two litters a year – that’s up to 16 piglets. What a gift she will be. 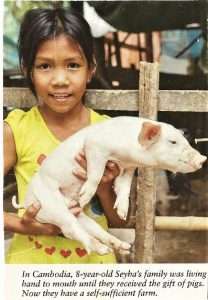 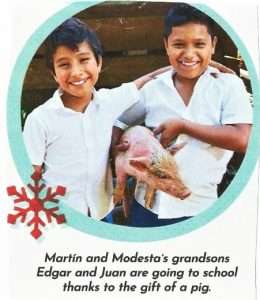 Now we will concentrate on “Spit Monger” for our next gift. She is more than willing to do her part in reducing the hungry of the world. Help us to allow her to do that. 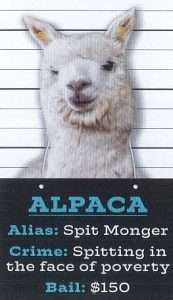 Heifer Update for October 2022 I want to join my